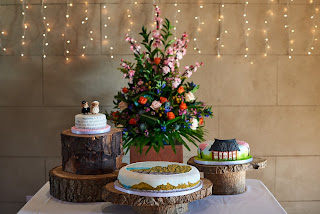 Man and Wife
(A Short Story in First Person Plural)


As soon as we heard “I now pronounce you-” of course we wanted to kiss, but we’d been warned there was more to our wedding ceremony. A bit of praising, some nibbling and sipping, then singing and posing before the march out. Our photographer suggested we greet everyone leaving the church, which in hindsight we’re glad he did, because, wait ‘til we tell you: there is no time to do anything you think you’ll do on your wedding day. We thought we’d have great chats with all our guests (there were less than fifty after all), but we were lucky to get three sentences with anyone after that meet and greet outside the church.

It did take a while to pose in the park for photos. We’d hoped to get some in the fort, but just like the last time we went there, the gate was locked. There were still some great ones from around the lake and grounds. We got the official photos the other week, but we haven’t decided what to print yet. Still, it’s nice to have them.

The meal took a good chunk of the day, but then again it was a blur to us. We truly wish we could eat that meal again. It was incredible! Michelin star chef, don’t you know. Well, it’s not as noticeable at other people’s weddings because eating the nice food is your only job, but we were barely finishing one course when hints were made to clear our plates or let them be taken away half eaten, because we’d tried to go around the other tables for hellos or had a request to decide on something else’s timing. By the time pudding arrived, we knew to shovel it in before slipping out to catch the setting sun rays for natural filtering of romantic images. Those ones turned out really well. Of course, the speeches were in between courses, too, so that added a bit onto eating time. Everyone was careful to keep to their time, though. Good stories, none too embarrassing.

The other thing that zapped away time was changing in and out of different outfits. We thought it might be fun to show everyone the traditional outfits we would have worn at a Korean ceremony, so before we left Korea, we took the time to get fitted and chose the material according to what the lady told us was proper and should suit each of us. Well, since we had gone to all that trouble, we had to wear them at the reception, but it took a bit to get them on and off. They did look great for explaining the Korean games. Everyone got into those and had a good time, didn’t they?

They fairly got into the dancing, too. It was awkward when we did that first dance, but, being a bi-racial couple, we’ve learned to zone out stares when we’re in public; it’s much nicer when it’s at an event where friends and family are expected to watch. Anyway, they were eager enough to have a good shake as soon as we waved them up, but it helped that a few people really got into it and encouraged everyone else. Who knew a Korean pastor could dance the night away so well?

The next day was gorgeous; just as good, if not better than our wedding, so we headed out to the Giant’s Causeway because we couldn’t have Korean family come all that way and miss it. Did we have any of the cake for lunch? Mum packed us a picnic so we stopped on the way. There were sandwiches and crisps, but don’t remember any cake then. It was incredible, that cake! Wouldn’t it have been funny if we’d taken some of the giant’s causeway cake to eat on the rocks? There’s still some of the gyeongpo pagoda in our freezer, the chocolate one. It could be finished on location, if we go there on our Korean anniversary. We weren’t the only ones who thought it’d be a good day to go to the causeway! Still, we got to see everything you ought to see there, and we even went on along the coast and had tea in Portrush. We thought about visiting the famous Barry’s, but an amusement park isn’t as fun without a couple of kids and we were all pretty hungry by then. Fish and chips would have been good by the seaside, but we ended up at an asian restaurant. At least those of us missing rice had a good fill.

The sea air must have exhausted everyone, because we all took it easy the next day, even though it was the last day for the Koreans. Oh, it was so funny when we dropped them off at the airport. Well, that part wasn’t funny, but afterwards we went to maccy d’s for a snack with our Northern Irish Mum and Dad and this guy dressed up in a suit came up and asked us about our food, then talked about his own family having an exchange student for a while. We didn’t bother to correct him, but did wonder if he’d be shocked if we showed him we’re not exchange brother and sister.

The honeymoon was short. Good, but short. It didn’t feel as rushed as the wedding, but it didn’t exactly feel like we’d imagined a honeymoon. No two weeks away in the tropics. We drove to Sligo, checked in at the hotel, checked out the river, ate pizza, slept, had breakfast, drove to the beach, ate the best battered fish in the world, walked along the sand dunes, ran as the rain pelted down on us, walked past the river, found a pub with a lovely smell of food (best french dip in the world), slept, filled up on breakfast and took what turned out to be the scenic route home, stopping to photograph waterfalls and mountains along the way. Oh and cake! We took some of the causeway vanilla cake with us and had to stop ourselves eating it all on the first night.

It was worth coming back, though, because we got to have a play with our nephew, and any more time with family is worth it for us. We had noodles, that night, didn’t we? Remember one of the containers was missing and we were all starving? Funny, how one of our final requests in the UK was something you’d think we’d get plenty of in Korea. It’s not the same in different countries, though. The last meal was a good old roast dinner after church. We had to eat and run for check-in, but Mum knows a good roast will cure any travel worries. It did mostly; not so many tears. Of course, it helped that it was both of us going back together this time. Plus, we’d see those faces that sent us off soon enough when they’d get on a flight to Korea for the Korean celebrations.
#weddingstories expat life first person plural getting married point of view POV short story wedding planning wedding planning from abroad wedding stories writing challenge 2016/17