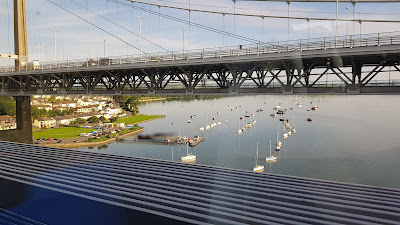 Finally, time to part and time to get dressed.  Still shivering all the way to the drawers.  Still shivering when fully clothed and knowing the house is warm enough.  "Jacob!"  Shocked might be more accurate than surprised.  "Do you want sauce on yours?"  Can't think of eating.  A decision must be made.  What to do?  But there's never been a choice.  Why does it feel like there is one now?  It feels more real.  Feels more vital to life and possibilities.  But no.  There's no choice.  You chose a life and you stick with it.  But there never really was a choice.  It was like Angie chose that night.  It happened in frustration and anger and panic.  Panic over what?  Over a choice, again.  Choose to stay and loose the woman you love, or choose to go and risk all you've built up so far.  And now, the same choice.  But last time it was others that made it.  Never been one to stand up and make a decision.  Even when the right one was known.  Still avoided it.  Lazy?  Easy going?  Or deep down terrified.  Never admit to any of them.
But now Alice is awake, and the bacon will be getting cold.  And there is no decision to make.  Just get over the shivers and get down the stairs.  "Jacob!  Your food is getting cold.  And the baby's awake, I need your help."  Yes, yes.  On the way.  Back to reality.  To normality.  It's funny how you can forget something so well, until it's shoved in your face again.  But why is it so hard to forget it again?  You forgot it once, because you had to, it was the only way.  So why not now?  It can be done.  It will be done.  How was it done the last time?  Work.  Friends.  New girlfriend.  Partying.  Lots of partying.  Anything that just didn't allow for time alone to think.  So why, now, when it's a busy time, with lunch, settling a baby and trying to listen to the endless stream of chat from the girlfriend; why now is it hard to stop thinking about the forgotten things?  They should be forgotten.  They want to be forgotten.
They will be forgotten.  So concentrate on the chatter.  "...but mum has already promised to make a cake, so I had to tell Sarah we don't need one, but she insisted that this would be her gift to Alice.  Alice can't even eat the cake, so it seems senseless to me to have two christening cakes when we could..."  Not sure that's totally worth it.  Christening and cakes aren't exactly exciting topics.  Nor are they topics desired for discussion or distraction.  But then again, starting a fight about the christening again could help to distract from other thoughts.  Not likely.  Best to keep the peace.  "...would you?"  Oh, now she's looking for a response.  Nod and smile.  As best you can.  "That's if I'm nice to you and bother to bring any home.  I won't eat it; I'm still trying to get the baby weight off, so it'd just be for you.  But I don't know if you deserve it when you still refuse to go to your own daughter's christening.  Hmm?"
This is it.  Perfect opportunity for a fight.  Something to explain the tension and confusion.  Something to be stressed about that will make complete sense to anyone around.  Something to hide these other thoughts away.  Say something to get her angry.  Something to really hurt.  Go on.  Something against her precious religion that seems to be deciding some things for her instead of letting her choose for herself like anyone else.  The clutch she hides in when it suits her and laughs at when it doesn't.  Just to look good and make her feel better about herself.  At least she didn't kill her baby.  But she still had sex before getting married.  She's still living with a man who isn't her husband.  She doesn't seem one tiny bit concerned about that.  Go on.  Start the ultimate argument.  Hit her where it hurts.  "Maybe I don't."
Yep, run away.  And take the dirty plates with you.  Do the opposite of what you really want.  Let it all just keep plodding along.  Don't stir it up.  That's what makes you feel better.  To hide away and not face up to what you think.  Or want.  Go with what others think.  Follow the norm and just get by.  Forget everything else.  Yes.  This is how to do it.  Don't face up to anything.  Put it all away again.  Hide it in that secret place and go with everyone else.  It works for them, so it'll work for you.
"No.  I don't think you deserve any cake.  So I'll just give it away at the church.  They're supportive.  They deserve it."  Yep, don't fight back.  Let her make herself feel better by blasting you.  At least someone's content, then.  And then the rest will follow.  With time.  She can't force anything on Alice.  Alice will make her own choices.  I'll make sure of that.
"But you can always change your mind, if you want the cake."  No.  If there's one thing to stand up to, it's this.  This is my closure.