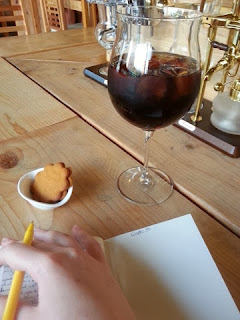 I hate endings.  In life and in writing.  And now I'm approaching another one in my latest story.  The thing is: it's the ending that keeps me going when I write prose.  When I wrote my first novel a couple of years ago, I had no idea what details were going to happen as I wrote each chapter, but I was sure of one thing: this final image and impression I wanted to leave with my readers.

It was fun to just explore what those characters would do along the way, knowing they had a purpose, because I knew where they were going to end up; and it feels the same way this time as I am writing my novella.  Again, I have a vague outline of what will happen in each chapter, and some random bits of dialogue I know different characters have to say, but other than that, and this final feeling and image, I have no idea what will happen.

So I should love endings.  When I know how something will end, I know I can get there and it keeps me going.  But I do hate them.  Because that means the end of my time with those characters.  You see, for months before I have actually written anything, I have spent random spots of time with the characters in my head, working out who they are and why they are together and what their story is.  Then I have to just get going and put it all on paper; which is great because I get a huge dose of them and they become part of my thinking in that short period of time.  But then comes the last chapter.  And I know what is going to happen to each character, good or bad; but worst of all, I know my time with them is over.

I've lived in five different countries throughout my life and I've known a lot of people.  I know that some of them will keep in contact easily, others with meet up again as if no time has past and some will just fade away because that's life.  I know this, but that doesn't mean I find it easy when those people have had a special place in my heart.  And my characters, each of them (even the ones I would avoid in real life) have a special place in my heart.  It's hard to leave them, and part of me really doesn't want to write that last chapter, because then they're gone.

However, if I don't write it, I can't get on with the next story, or share that unfinished one with the world.  I know I have to say goodbye, so it's on to the last chapter, with maybe a few tears along the way.